Why Use Hashtags? They’re the Modern Day # timecapsule

Go Down
Why Use Hashtags? They’re the Modern Day # timecapsule

Do you remember when time capsules were all the rage? Most people would say “No?” and then look at you with a weird face.

Well, there’s a good reason for that. Everyone knows exactly what a time capsule is, and the average person is fascinated with the idea of what might be inside one if they found it. The fact is time capsules are very difficult to create. Therefore, the idea never hit a critical mass large enough to become a social phenomenon.

I hypothesize that the reason time capsules were created in the first place is because they satisfy 2 basic needs that every human has: social needs and esteem needs. Creating a time capsule offers a group of people the potential to have fame, dignity, recognition, achievement, belonging and acceptance, which are all pillars of social and esteem needs. Back in the day, your social group would think about creating a time capsule with the hope that future generations would revere their accomplishments. When it actually came time to build the time capsule, you would notice 4 main ingredients for a successful time capsule:

Doesn’t that sound like a lot of work? No wonder time capsules never took off. Fast forward to 2014 and there are literally millions of juicy time capsules all over social media in the form of hashtags. In fact, #TimeCapsule has over 20,000 photos on Instagram just waiting for someone to dig them up. What’s that, you say? You never thought of hashtags as modern day time capsules? Wondering why people even use hashtags in the first place? Check out this list of the top 10 types of conscious and subconscious motivations for using a hashtag in social communications (all numbers based on Instagram posts): 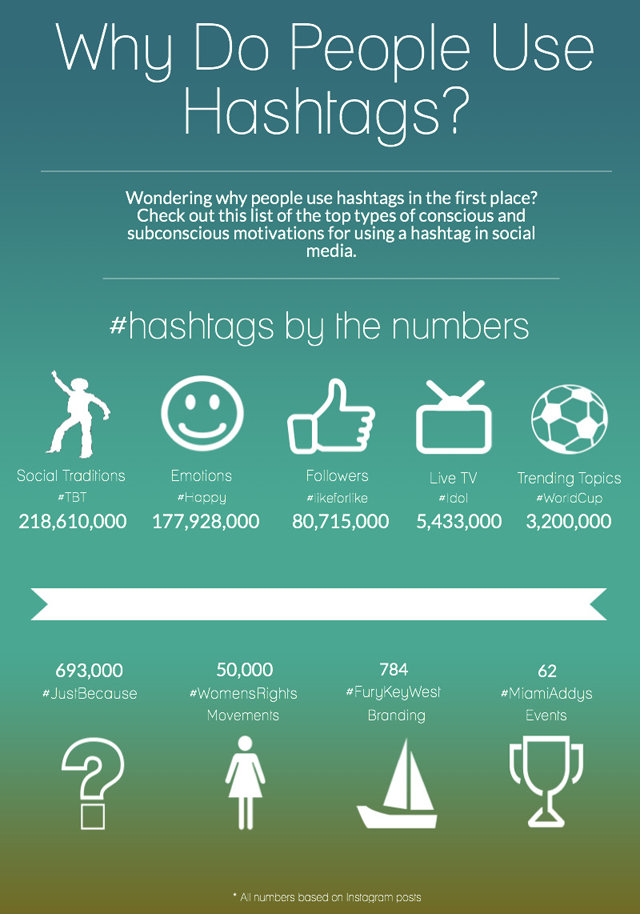 Don’t most of these motivations coincide with the same reasons a group would collect memorabilia for a time capsule? Now don’t get me wrong, I’m not sure if hashtags will be available for people to search through 50 years from now. That’s up to the social media powers that be, but for the time being we’ve got an incredible opportunity to catalog our achievements through social media.

It’s so interesting to see how people have a conscious or subconscious need to leave their footprint in the world. It all goes back to the psychological theory that Abraham Maslow published over 70 years ago about a person’s hierarchy of needs. Even though your #tbt post will vanish from the main feed faster than Usain Bolt in the 200 meter dash, you still have an impulse to include those hashtags in your posts. It’s the same type of impulse that influenced people to create time capsules throughout the early part of the 20th century. Though some articles state that the hashtag was created to categorize millions of tweets and posts into manageable niches, I think hashtags are a reflection of the enduring human need to belong and be recognized for achievements. Hashtags are the modern day #TimeCapsule